“The Word was made flesh and dwelt among us and we beheld his glory, as of the only begotten of the Father, full of grace and truth.” John 1:14. 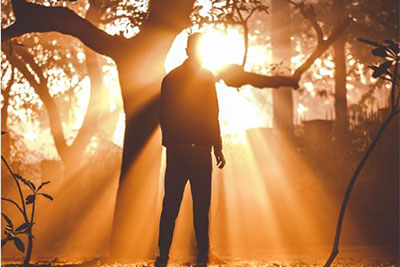 Although He was God, He agreed to a human birth, He lived with men, and He laid aside the glories of heaven for us. Why would the Lord, the eternal God, subject Himself to loss of his glory?  To save humankind from eternal condemnation.  John 1: 3 says that “All things were made by Him and without Him there was anything made that was made.”  He is the one who traded our lack for His bounty, our shame for His mercy, our sorrow for His joy, our darkness for His light, our weakness for His strength.

He became poor for us. The Savior had no place to lay his head, He had to even borrow a donkey to ride upon. He was willing to suffer scorn and ridicule. He gave up His throne for a cross and endured curses and beating. He left the fellowship of his Father and the companionship of the angels, so that He could take the punishment which belonged to us and be counted with the criminals and murders. God made “…Him to be sin for us, who knew no sin, that we might be made the righteousness of God in him.” 2 Cor 5:21.  Jesus became a sin for us, the very object of God’s wrath. God hates the sin, but he does not hate the sinner. There were really only two ways for God’s justice to be satisfied; either by the everlasting punishment of the sinner or in the death of Jesus, His beloved Son. Jesus subjected Himself to something that you and I deserved, He took our place so the we can be FREE and have eternal life. Imagine this, the eternal God who is self-existent, who has no limitation became flesh and lived with men. Why would He subject himself to become a man and became a servant?  That was His gift!

If we have not been forgiven, we do not know how wonderful it is. What a relief and joy it is to be forgiven.  It takes the burden off a soul and rejuvenates it, giving amazing deep lasting joy. The gift that God has for you is so more than forgiveness. He gives us His righteousness, mercy, holiness, and purity.  The gift of God transforms us from the sin of disobedience to a perfect righteousness.

Friends, we do not deserve that experience, we can never purchase it. We deserve eternal death.

“For the wages of sin is death, but the Gift of God is eternal life through Jesus Christ our Lord.” Rom 6: 23.

Those who receive the gift of God are reconciled with Him.

“…The covering which Christ Himself has provided can make us meet to appear in God’s presence. This covering, the robe of His own righteousness, Christ will put upon every repenting, believing soul.” Ellen G. White COL 311

Do you want His righteousness?  How do you get what only God has?  We have to ask for it!  When God gives us His righteousness then we can love like He loves, we can be patient with other people, we can be a light to the world and the salt of the earth. Then we can have a constant connection with the divine. When I have His divine love, then I can have something to give. His feelings, His attitude become mine. We can then live His life. His gift of righteousness begins with forgiveness, but it is deeper, it gives us His righteousness, His mercy, His grace and pardon. The incarnated God can become part of our life, we can be born again. He longs to give us this gift and promise but we must make sure we want it more than anything in this life.

Remember the verse, “As many have received Him, to them He gave the power to become the sons of God.” John 1:12.

Let us desire to receive the greatest gift.